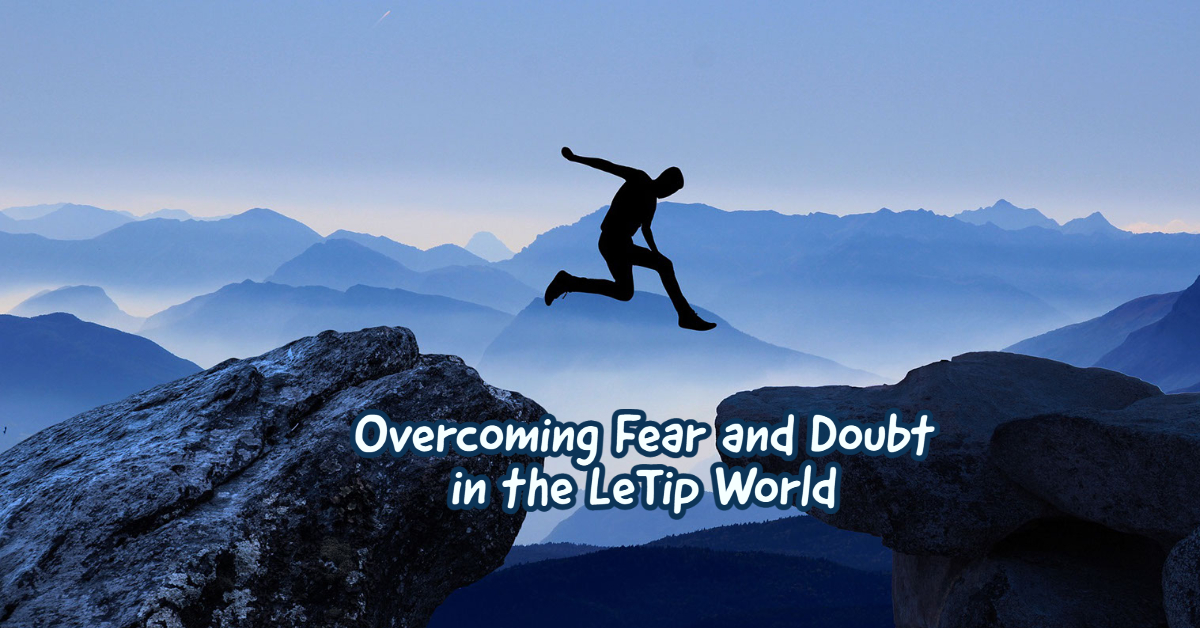 Overcoming Fear and Doubt in the LeTip World

The past year has been a monstrous challenge for us all in different ways. How we conduct business has been transformed overnight and continues to evolve at rapid speed. We need to continue adapting to new ways of working, living, socializing, and shopping. What’s the right thing to do?

Shutting down the economy in many states has been a business owner’s nightmare. It’s tough enough to survive during good times, but during a pandemic!!!??? We all know people who have lost everything they worked for. Everyone is searching for solutions and if you ask 10 people what to do, you will get 10 different answers. Everyone has a view, but who is right?

As business owners we don’t have the luxury of someone out there to make sound decisions for us or to be our caretaker. We need to make decisions and we need to take bold action. It can be very easy to lose sight of your goals and even to lose self-confidence altogether.

But we march on!

As members of LeTip chapters nationwide, we enjoy a fabulous advantage. We have each other!!!

LeTip members are among the brightest, cream-of-the-crop business owners in the world. But even the best can go through periods where fear, confusion and doubt can completely consume us. When the pandemic began, we all feared for ourselves, our fellow chapter members and the businesses that were most vulnerable. Chapters like ours on Long Island (and New Jersey) were in the epicenter during the early months of the worldwide panic. We watched as New York was shutting down and all businesses were suddenly endangered. Doubt was everywhere! But we hung together to support the businesses that were hit the hardest.

Our chapter, LeTip of Bayport, on Long Island has faced several difficult periods in our short history where fear and doubt could have easily crushed a less hearty bunch. The chapter nearly folded within months of being founded in 2018, when the original President died suddenly, and the remaining chapter leadership simply lost its way. But I can say unequivocally that I was never prouder of our membership than when we all rallied to support each other and support hospitals in the area during the worst months of the lockdowns. It would have been easy to succumb to fear and self-doubt. But as a group, we were steadfast and decisive throughout the ordeal and we overcame the rough seas that rolled in.

It doesn’t mean that everyone faces fear the same way and it doesn’t mean that doubt can’t seep in. Unfortunately, a couple of our members were so consumed with fear and doubt that they went dark and simply folded up their tents and gave up. It can happen. Overcoming fears and doubts can be overwhelming. But the moral of the story, and a big lesson learned, is that sticking together and supporting each during tough times can be the difference between survival and extinction.

We all spend weekly meetings preaching and reinforcing the LeTip Creed and being each other’s unpaid sales force, but it isn’t often that we talk about mutually overcoming fear and doubt or talking about making the tough business decisions when the wrong choice could spell doom, or about banding together to support a fellow chapter member in ways that can’t necessarily be accomplished through tipping, recruiting or performing a slick 30-second commercial.

Helping each other to overcome fear, doubt and confusion just may be the most unsung benefit to being part of your LeTip chapter. You may not be able to save everybody, but I’ll bet there are several dozen LeTip members across the country that will make it through this national ordeal, in large part, because we all did it together.