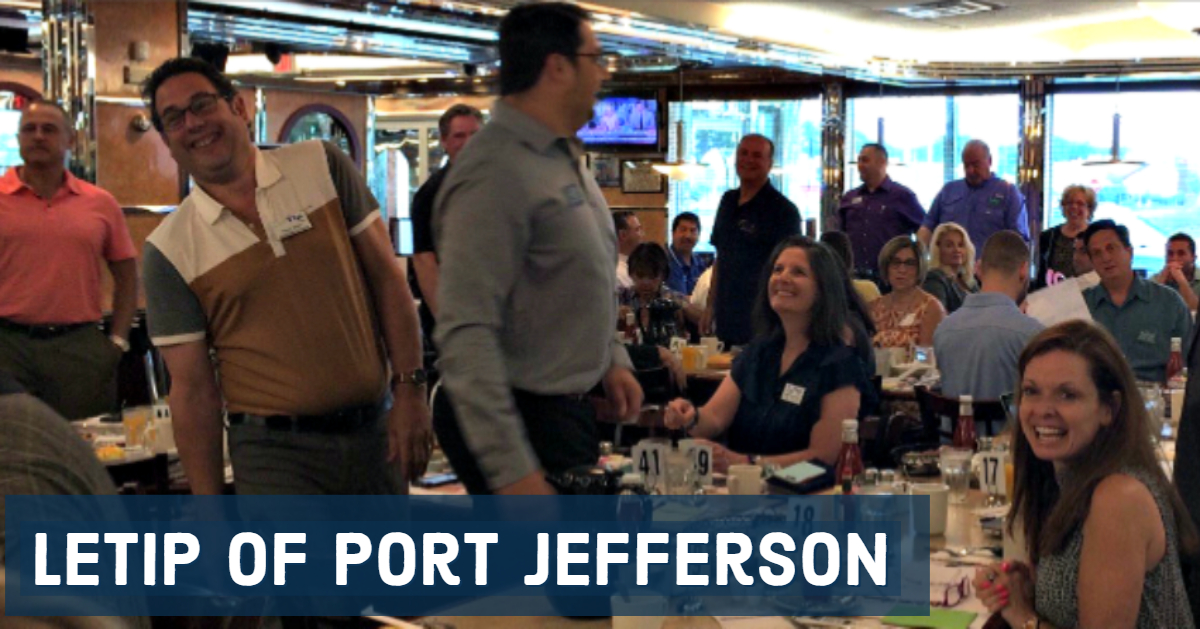 LeTip of Port Jefferson, NY was founded in August of 1999, making this year their 20th anniversary. They are one of the most vibrant and active chapters in the East Coast. It is easy to feel involved and captured by their energy even from 2,500 miles away at LeTip headquarters. Port Jefferson’s Publicity Director, Jodi Crisci, keeps their Facebook page active by creating video collages of their weekly meetings: she never misses a beat! LeTip of Port Jefferson is the largest LeTip Chapter in NY/LI and tied for second place overall with 76 members. They score high in the tipping ranks as the second highest number of tips passed between July-Sept 2019 with a total of 1,897. Wow! Two individual members rank in LeTip’s Top 10 Highest Tippers from the months of July-Sept 2019, Joseph Milillo passed 99 tips, and Chapter President Melanie Rasmussen with 90 tips!

LeTip of Port Jefferson, NY truly is family. Last month they celebrated their 20th Year Anniversary, had a BBQ Summer Celebration and supported fellow member Danielle Ormsby in the opening of her new Spa. Multiple members joined in on the fun and offered their services including Selfie-Shot Photo Booth, BBQ Stews catering, North Country Limos for transportation, Sip&Say Wine for refreshments, and New Island Remodeling helping with the remodel.

Speaking of great members, earlier in the year the Chapter celebrated Ken San Pedro’s Gold Badge upgrade. Ken is a 17-year member who has held the Carpet Cleaning category and is now a “LifeTime Member”, never having to pay international dues again! Also Gold Badge holders are Rick Levine, Commercial Audits, and Michael Barba Sr., Auto Body Repair. Rick and Michael went above and beyond and helped recruit new members for a new chapter, LeTip of Ronkonkoma, NY this year. Rick Levine is three sponsors away from earning his Platinum badge! We’re sure the chapter will be celebrating that accomplishment soon enough.

Congratulations to Melanie Rasmussen, Chapter President, and all board for keeping the structure of a great chapter.